Gathering persimmons for our winter ale, First Frost, is hardly scalable or efficient. But it's a heck of a lot of fun. I needed to get out and in the field for a few hours, especially after weeks of "business-y" meetings. Unlike 32, I crave the rural quiet.

Eagle-eyed readers (and a few doe-eyed ones) may remember a post from a few weeks back discussing a Southern persimmon beer recipe from 1913. We're thinking about making this recipe, following it to a T -- including the rainwater part. But it's far more important to see if we could take this Southern winter tree fruit and make tasty beer out of it. I'm pretty sure that a non-barley-based beer from 100 years ago would likely taste more like Pruno than, say, Westvleteren.

Alas, I'm getting ahead of myself.

The first step in a persimmon winter ale is to get some persimmons. A few years back, I read a great article in the Carrboro Citizen about finding persimmon trees. Check it out. But come back, because I'd be sad if you didn't read the rest of my story!

Are you back? Great! Thank you!

I had to find a persimmon tree. To become its "caretaker," a seemingly Southern euphemism for "if you're not using the fruit from this tree, I'll gladly take some." At the peak of the harvest (particularly good this year, word had it), I was still hunting down a source. I posted on my local bulletin board -- not much luck. I asked renowned chef Bill Smith of Crooks Corner for advice -- he told me to keep asking around; to find someone just as he has.

Facebook to the rescue. I posted a request and within a few days had my source -- a family from church we've known for a few years. Here's the tree. 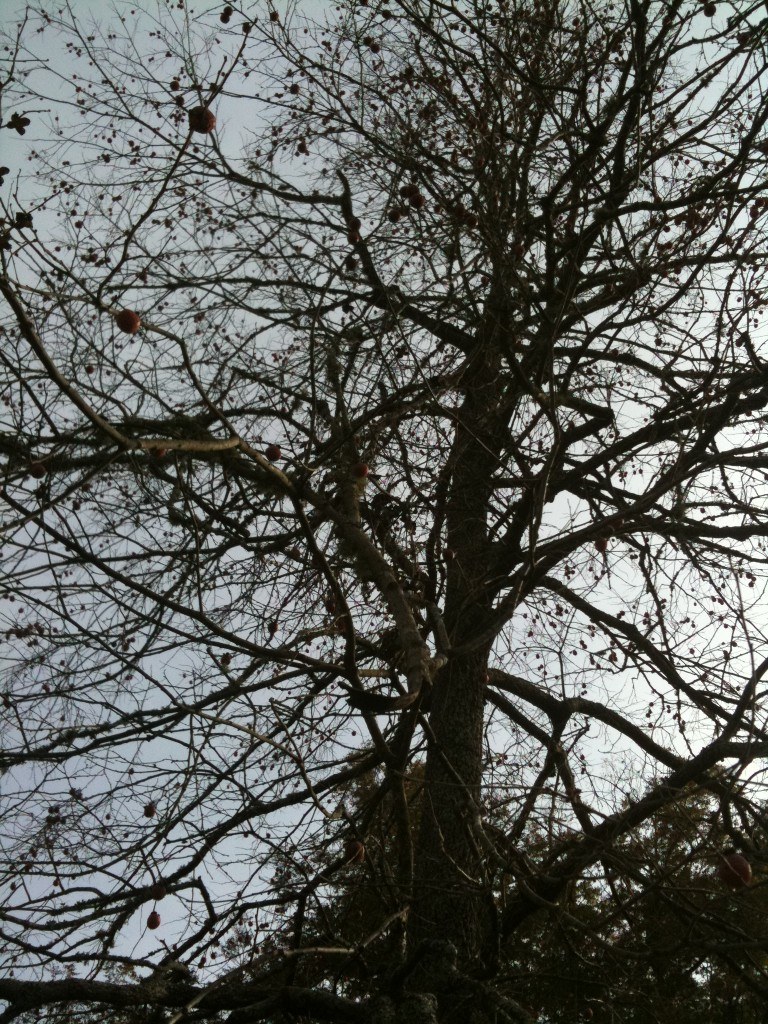 But a gentle knock of the branches to "encourage" the fruit to fall seemed reasonable. I started with a gentle shake of the limbs, which produced healthy results:

After several hours of knocking and collecting, I had quite the batch: two huge bagfuls of sweet, ripe wild persimmons. Next time around I'll collect the persimmons in a large tub of water, as the sheer weight of the harvest tended to crush the already-ripe fruit. For some reason, I didn't take a picture of the final harvest, so here's a shot of 1/100th of the end result: 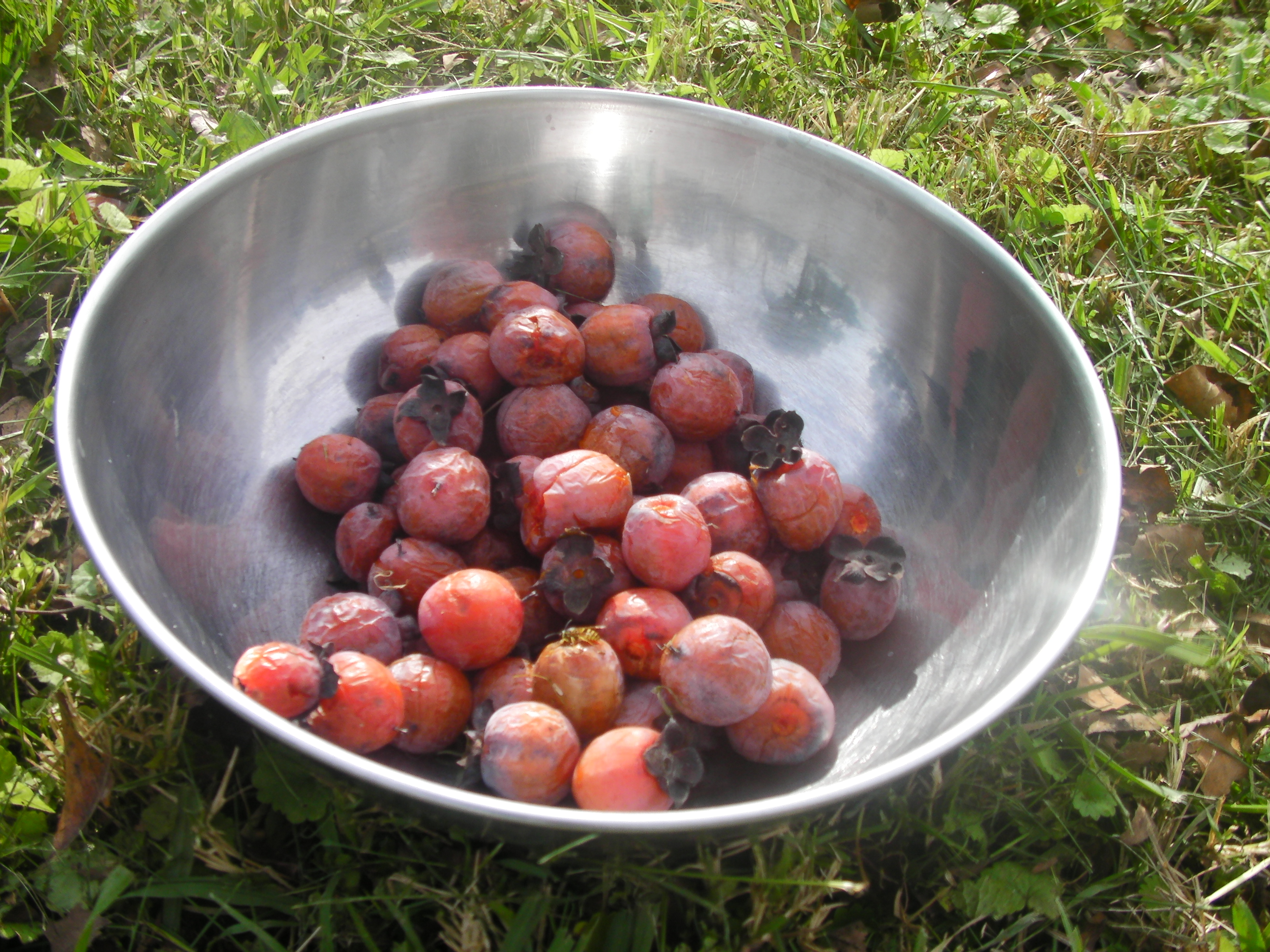 There are already a cuss-ton of pictures in this blog post, so suffice to say I followed this procedure to mash the fruit. We ended up with two large bucketfuls of sweet fruit puree. It tastes like spiced fruit. Perhaps those of you who've had persimmon could come up with a better description. I personally think of it as ripe apricot meets fig meets tomato. Sound gross? It's not. 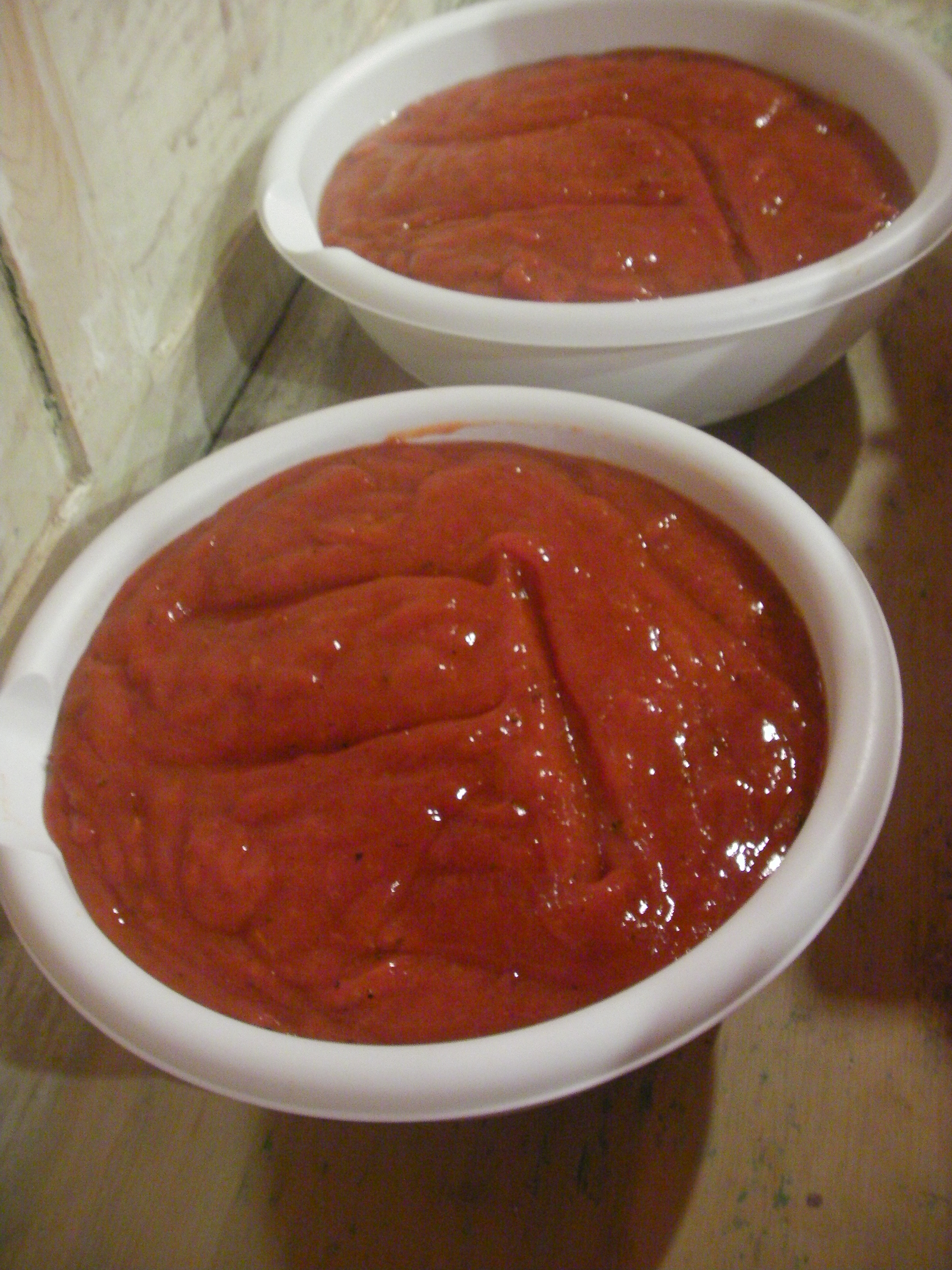 The harvest will make several rounds of First Frost, our winter persimmon ale. Details on the beer coming next week -- right now, it's fermenting away. I also made some persimmon pudding, following Chef Bill Smith's recipe...yep, the same Bill Smith who encouraged me to keep asking around and keep hunting.

I found my treasured tree. Thank you to my friends, its true caretakers, who shall remain nameless on this post so no one else bugs them.  I offered them some persimmon pudding but they seemed more interested in the beer. Here's hoping it turns out...the harvest took some time, and I can think of nothing more rewarding than having 32 craft the harvest into a memorable winter ale.