Fullsteam is excited to head to the nation's capital for ChurchKey's first-ever Inaugural Brewer's Ball. Word enthusiasts will delight in the fact that this is, in fact, the Inaugural Inaugural Ball.

On Monday, January 21, we will join nine other breweries in a festive celebration of beer and politics. I understand (and respect) that not all of you are of the same mind when it comes to politics and policy, but I think we can agree on one thing: good beer brings good people together. And, after all, it is the intersection of politics and beer that first got me into the craft beer industry. So I am doubly excited about this great event.

If you're in the D.C. area, come join us for an amazing evening. RSVP and event details from Churchkey's Greg Engert below. 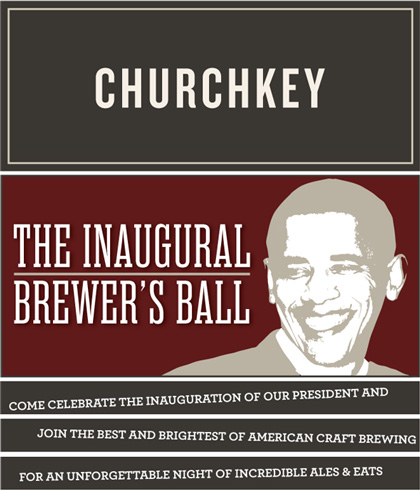 Once every four years, the nation turns its eyes toward Washington full of renewed hope - collectively optimistic for another chance to do better. Closer to home, this occasion is marked by red carpets, glitzy gowns, long limos, jaw-dropping price per plates and celebrity spottings galore. Yep, we're talking about the Presidential Inauguration. As much as we respect tradition, and we do - we thought we'd take a different route and use the 57th Inauguration as an excuse to throw an incredible beer bash and tip our hats to our very own commanders and chiefs: We're talking about fine craft brewers of this great beer drinking nation. As a home-brewer, we think the President would approve.

On Monday, January 21, ChurchKey's Inaugural Brewers Ball will bring together some of the brewing community's brightest stars including Rob Tod of Allagash Brewing Company, Sean Lilly Wilson of Fullsteam, Dan Kopman of Schlafly Beer, Tim Adams of Oxbow, and David Yarrington of Smuttynose, as well as, Mark Thompson of Star Hill Brewery, Jim Caruso of Flying Dog Brewery and Hugh Sisson of Heavy Seas. Also in the house: home team heroes like DC Brau’s Brandon Skall & Jeff Hancock and 3 Stars Brewing Company’s Dave Coleman & Mike McGarvey, all of whom will show off their finest ales on the ChurchKey taps for the night.

Guests will get to mix and mingle with this talented lot of brewers while enjoying their wares and will also be treated to an endless parade of stationed and passed bites from Executive Chef Kyle Bailey & Pastry Chef Tiffany MacIsaac, ranging from oysters and charcuterie to Brat Burger sliders and flatbreads.

DETAILS: Tickets are $150 per person and include all food and beverage. Capacity is limited, so tickets must be purchased in advance by calling (202) 567-2576. For more information please visit www.birchandbarley.com.